In the first moments I can recall, I remember pretending to be asleep whilst I lay in my bed wild awake often staring at the moon. The moon helped me to drift off into dreamtime where I could visit worlds that I would later grow up and transform into some sort of reality. When I was only 5 years old I stared at the moon so long one night that it became a ball of fire hurtling towards me and almost landed in my lap. Sometimes I have wished I hadn't closed my curtains so quickly in fear of that. I wonder if that moonbeam could have taken me home. I've never yet felt at home here. 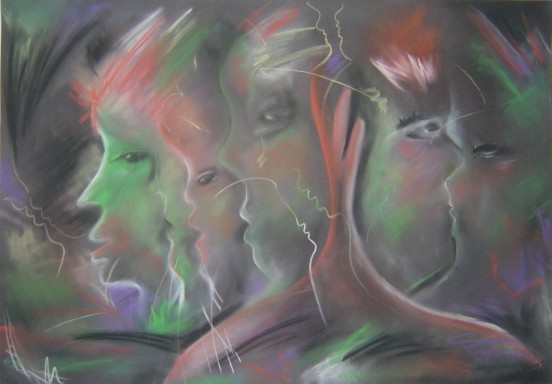 In the other reality of growing up I was born into some sort of ongoing TV soap drama, or otherwise warped black comedy on 24 December 1969.

My first experience of school was pretty extroardinary. Nobody would tell me their name because being a Londoner then I was deemed a foreigner when I arrived in Hastings at 5 years of age. I had my first experience of racial separationat Elphinstone Infants School snd it was harsh. Nobody would tell me their name. I found it difficult to make friends.

One day when leaving the classroom when I was the last to be let out the door, in my exacerbation to make friends something came over me of which I had no control. Before I knew it even I had taken it upon myself to upturn the other kids just sprouting watercress seedlings, drowning their little shoots in little piles of compost, as we went out to play and I was at the back of the queue.

My apparent revenge (if you can call it that) was short lived and I was hauled up to the headmistress for my defiance.I tried to explain that I wanted to know who the plants belonged to. In my mind I had watched them growing and recognised to whom the best seedlings belonged. It was just simply for me a way of learning the names of my potential class mates, as we had all written our names on stickers underneath those plastic cups, since this event still challenges me and I often wish  to have not done what I did that someday that would always haunt me.

This memory would slip my young mind only until I moved school about a year later and opposite to a Mormon church, where the tempting playground of wooded camp land lured me with my friends to build camps on every sunny day. We got to know when members of the congregation wouldn't  be there and mostly got away with building camps and tree forts in the woodland. One day I got caught though and a hoard of Mormons took to chasing me off their land. I fell and got a stone stuck in my knee and had to go to hospital to have it removed and left with a nasty scar to remind me of the event.

As an apology to my parents, my sister and I were invited to eat cake and play with the Mormon children. I remember thinking that a caning would have been more tolerable since I had mastered being at the whip end of the lash by this time. Once in the confines of their place of worship my thoughts would be confounded. We were admonished for trespassing and made to say their prayers before being forced to sit and watch a Mormon film about their religious rape across the Americas, We didn't get any cake, or a drink even and I left their church more defiant than ever.

Well, that is how I remember it.

By the time I was approaching puberty I had acquired an intense dislike of other children around me. The boys seemed to stink of wee, play with their willies all the time and scrap continually over marble matches. I was very proud to excel at winning their marbles, and conkers as it goes. The girls used to parade their developing breasts in front of my then flat chest. I consoled myself that aerodynamically I would be better at sports than they were, and I was. This cynicism was kept close to my chest, a survival mechanism that helped me to cope with the other harsh realities that I had no control over.

Most of the adults around me, in my eyes lived everything but honest lives, extolling the virtues of manipulation, power and greed, often capitulating religion and their political viewpoints whatever they were, justifying themselves and their faults before church on Sunday where the local priest would undoubtedly give them forgiveness, through varying degrees of the Christian idendity they had adopted as their disguise. This was a point in my life when I really began to understand people and the paradoxical universe of my ideas that I was reeling from seeing at too young an age. I was having too grow up too quickly and I knew it too.

By the time I was 11 years old I found myself inspired to do drawings of the naked body. The unique individuality of every human form held some fascination for me that I wanted to study. I used to go to the library and get scores of books so that I could copy naked figures from them. Round about the same period I also started to write a diary called 'The story of Joy' it was my secret autobiography as an abused and resilient child. I remember spending an enormous amount of time drawing a self portrait on the front cover. It was a tragic piece of artwork really. On one side of the face a portrait of me the crying girl while the other side revealed hope for a life I wanted for and hadn't yet experienced. It was the only finished portrait I ever did, and only my mother knows where these artworks during this period of my life disappeared to.

My nudes remained generally expressionless, often headless and I avoided becoming a portrait artist hereon. For me the posture and gesture of the body is a portrait in itself. Faces just there to confuse and mislead the onlooker.

Soon after this period I would earn myself the notoriety of becoming Hastings then youngest Queens guide. It was such a relief to have achieved my goal and then quietly remove myself from the clutches of the church and a God that despite my efforts I found I had to eventually pretend to believe in. I was thirteen, I had become sacrosanct to myself. I was done with religion. Everybody seemed to find a God when they are about to lose their life or its purpose, and nobody else will listen to their woes. That was then of course. I am somewhat more philosophical now.

Following this I would endure what seemed like endless malicious spite in an all girls school. I learned to smoke and get in with a tougher crowd, and became a bit of a tomboy. At the end of school I went to Hastings College to get what is now a useless diploma qualification in Graphic Design, and then quickly moved on to suffer a 14 year relationship with a control junkie. The trials and tribulations of being mother to three children and a victim would follow. But no matter what happened to me what an inspiration to my life my children were, have always been and are, giving me the courage and strength to beleive in my dreams.

During my motherhood years, I painted murals, worked for the theatre and went to university to study for an institutional art degree. I say institutional because all it did for me was take me further away from myself as an artist and mould me into rigid conceptualism.

Nowadays  I see that what they tried to teach me as an artist dominates the arts arena globally. I don't consider myself a contextualised artist though. Contexualisation is just like putting make-up on. A false gloss over the real subject.

I was asked to leave KIAD (on reflection it was a fortunate happening) due to my domestic situation outside causing me a great deal of stress at the time. I was offered to return and finish at a later date, but I never did. In On reflection now I feel I was spared the grace of having my natural thoughts stifled in writing endless essays that I knew I wouldn't be stalwart with at a later date.

Following this I would become a teacher and work at Hastings College under the auspices of continual inspections by Ofsted, administrative line managers and the such like, This hindering us teachers with tiresome excessively anal workloads, and I was a only part timer. The rest  of my working days spent studying for an irritating Phd, which only took me away from the joy of teaching at all. To be fair my peers in the art department were amongst the most supportive people I have ever met in my career, and in retrospect I can look back fondly at the times I worked there and the friends I made.

I have arrived at a point in my life where I often wonder what it takes to make a true artist since everyone seems to be calling themselves an artist these days but then having said that I like to think that a world where everyone is capable of explororing their imaginations is a more harmonious one.

It is my succinct belief that a true creative individual holds the key to inspiring others to create around them. He/she does not see the world as black and white but is prepared to explore and interpret the shades of grey and beyond in between.

I wonder what is a question? What senses are being touched when I look at a work of art. Then I wonder what is a work of art? Does it touch the senses, or explore something beyond that or what am I contributing myself as an artist by painting like this at all? From a more philosophical perspective I find questions are annoying, leading and imposing unless I am asking or seeking the answers for the improvement of a better whole truly exceptional picure of everything around us all.

I have come to learn that to turn a phase around is to look at the reflection of your mind. To turn everything frat to bunt and start again from the beginning where you find yourself in a place where you can reinvent everything you desire.

To delight and enlighten the senses and imaginations of the viewer is key to my work. That means breaking any rules and being a true artist to myself first, before I can be an artist for anyone else.

Perhaps this makes me an outsider in the scheme of things, but what a brilliant place to be as I am a happy artist now and nothing eludes my imagination and ability to perceive the world as it it really is according to you.

* I would like to add that this article contains purely personal remarks, based on my childhood and life experiences. I am not an atheist or accepting of any label title I may be given. This is for the benefit of the person/s who have been hacking my website, in case you happen to be a misguided worshipper, think I am a Hippocratic (that's OK), or maybe simply misdirected or jealous of my superior talent lol*